Meet Denise Worley: Creating Smiles and Community One Rock at a Time

It was just over a year ago when we were all under stay-at-home orders while learning to navigate life during a pandemic. While the stress and isolation took its toll on us in different ways, local mom Denise Worley, turned to her paint brush and a pile of rocks. It wasn’t long before thousands of people in the Pearland community joined her in creating a city-wide outlet through art: The Pearland Rock Hunt. 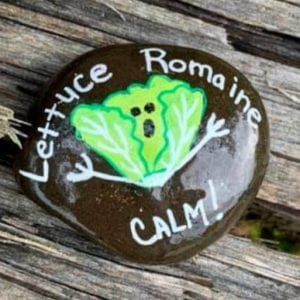 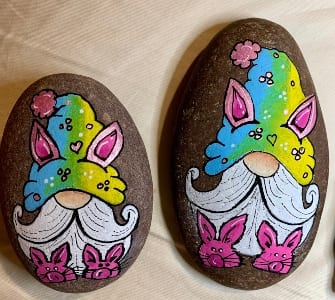 What is the Pearland Rock Hunt and what inspired you?

The Facebook group, Pearland Rock Hunt started during the pandemic.  During the pandemic there was nothing to do because everything was shut down.  I was emotionally struggling with the abrupt changes.  You could not visit friends, you could not go to a store, kids could not attend school, etc.  Basically, all there was to do was go outside and walk.

So, I began painting rocks and leaving them on our walking trail hoping it would bring a smile to whomever found it.  I then started a Facebook group, Pearland Rock Hunt.  I began adding notes to the back of the rocks instructing the finder to take a pic and post it on our site. It was so fun to see the first rocks get posted.

What is something that has surprised you about the Rock Hunt group?

I started the group with 3 members (my family, lol).  I thought if we get to 30 that would be awesome!  Now, today we have over 2,200 members.  I never knew how much joy a little rock could bring.  We have had people who were having a tough day post how much finding a rock brightened their day.

We also had an older lady who lost her husband and was suffering from Alzheimer’s.  She lived with her daughter and it was a difficult time.  She contacted me, I went out close to her house and hid a few rocks for her mom to find.

After I left, she took her mom out to find the rocks.  Her mother cried when she found the rocks.  After that, her and her daughter began painting rocks together.   I never knew people would enjoy it as much as I do.  It is fun and cheap therapy!

… I want you to know how much this page has helped my mother and I. For the last 2 days she has struggled. She became very angry and upset. … When I returned we sat down at the table and began to paint. This activity has saved me. Actually it has saved us. 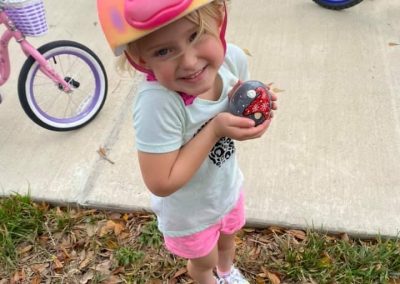 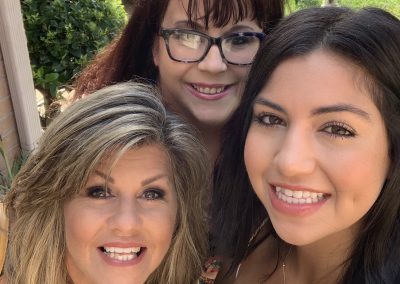 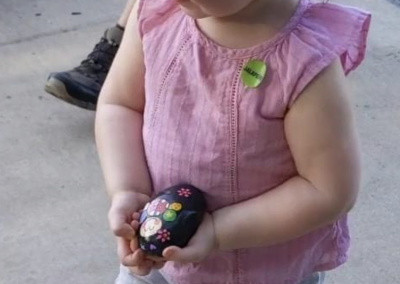 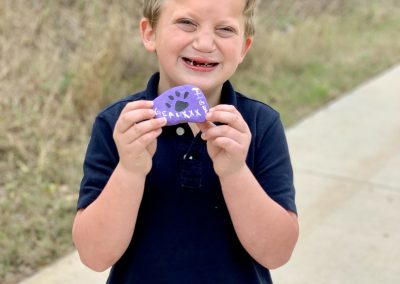 How exactly does the Rock Hunt work and how does one get involved?

Find a rock, take a photo and share it on our page! If you would like to join in the fun and excitement simply paint, mod podge, or decorate a rock any way you want AND, on the bottom, write: Post to Facebook “Pearland Rock Hunt”.

Be sure to use a clear coat sealant so that your creation is waterproof. Then the real fun begins: go place your rock in a park or in a special location and wait for it to be found! Watch the group postings to see if someone takes a photo with your rock!

People all around Pearland are painting rocks, hiding rocks and passing on the smiles. It is great fun for the whole family! No age restrictions!  Every painted rock is art! 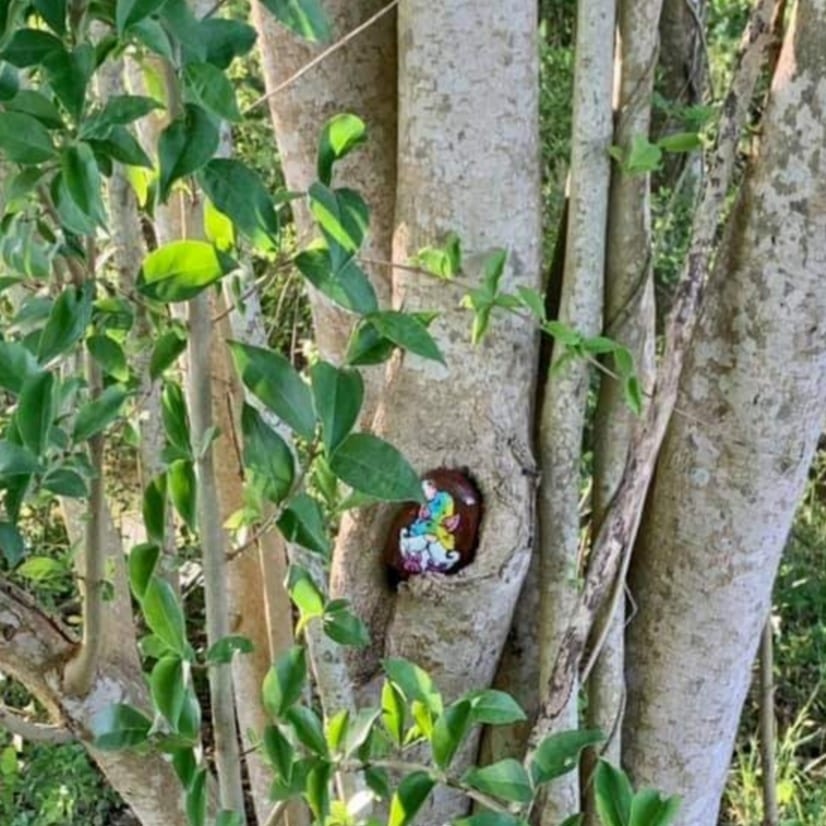 If you could describe yourself in one word, what would it be and why?

I think I would use the word “Creative”.  I have always volunteered to be team mom, room mom and cheer mom.  Always thinking of fun creative ways to decorate for the next party or engage kids through crafts and games.  I can always seem to whip up something in a crunch.

How many children do you have and what are their ages?

How long have you lived in Pearland? What made you decide to live here?

I have lived in Pearland since 2002.  I guess I liked the small community feel with big city accommodations.

Where’s your favorite place to eat and/or shop in Pearland?

Gosh, what is not my favorite place to eat?  That would probably be easier to answer.  Favorite place to shop now that’s a hard one. I love all the boutiques and their one of kind items, but I also love TJ MAXX, I mean who doesn’t like to find a bargain. 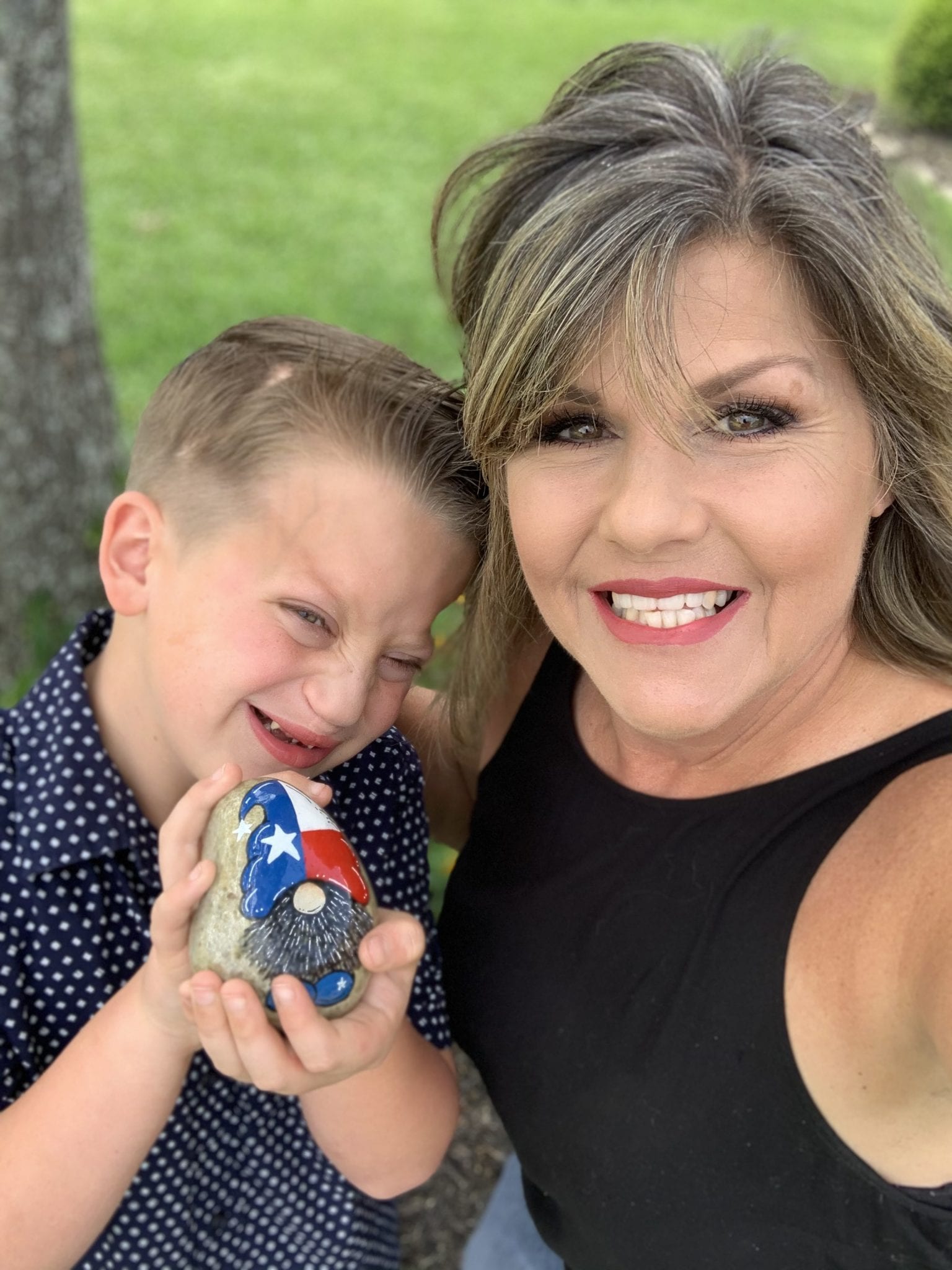 Where do you go locally for pampering or for a moms night out?

I don’t get very many mom nights out.  However, I love to do things with my family and friends.  I love spending time with my family at the beach or just playing games.  If it’s a game, I’m in!  I also have 5 great friends.  We have been friends for over 25 years.   We get together for each of our birthdays, Christmas, trips and any other special event.  Guaranteed a day full of laughs.  Always a fun and time.

What’s one thing people would be surprised to know about you?

I’m also known in our neighborhood as the scary house.  For Halloween I create an Evil carnival theme. It takes weeks for me to set it all up.  I make life size clowns and carnival props.  There are clowns on the roof, singing pumpkins, projections on the windows and in the fun house. I made everything except for the 12 ft. skeleton!  On Halloween night we pass out fresh popped popcorn and candy.  We usually get about 300 trick-or-treaters!  When Halloween is finished, we convert it to Christmas.  We have a real Santa that sits in his sleigh for kids to stop by for pictures.  My daughter elf passes out hot cocoa and cookies and there are snow machines!

The Pearland Rock Hunt continues to be an exciting and therapeutic activity to those of all ages who choose to participate. For more information, or to join the group, head over to Facebook for all the fun. And don’t forget to keep your eyes peeled for painted rocks while you’re out and about in Pearland.

This error message is only visible to WordPress admins

Please go to the Instagram Feed settings page to create a feed.